The Truth About Caffeine

Originally called “theine”, caffeine was first discovered in tea in 1827. It was later shown that the “theine” of tea was identical with the caffeine of coffee, and the term “theine” was then dropped. While the caffeine in tea and coffee are, technically, identical, the experience is different due to three key factors:

The biggest myth about the caffeine content between coffee and tea is that tea contains more caffeine than coffee. While this is true when measuring coffee and tea in their dry forms, this is false when comparing brewed coffee and tea. After all, one normally uses 2 grams of tea per 8 ounce cup, and 10 grams of coffee for the same quantity of water. A widely cited 2004 British study looked at 200 cups prepared by consumers going about their normal brewing routines. It found that the average caffeine level in the cups of tea (black English style teas) was 40mg vs 105mg in the average cup of drip coffee.

The amount of caffeine in coffee or tea depends on a number of factors, including the method and length of brewing or steeping. With tea, studies also show that leaf location on the tea plant affects content of caffeine in that tea. The youngest leaves, highest on the plant, contain the greatest concentration of caffeine AND antioxidants.

The greatest impact on caffeine content is the water temperature and length of steeping time. Black, Oolong, Green and White tea leaves themselves have surprisingly similar caffeine content. But a tea steeped for five minutes in boiling water is going to transfer a LOT more caffeine to the cup than a tea steeped for two minutes at 180 degrees Fahrenheit. Let’s be clear: Oxidation does NOT increase the amount of caffeine in tea. You’ll find a number of high profile tea companies, websites and books promoting this common myth. Simply put, there is no scientific basis to the claim and it results simply from measuring the caffeine in the cup after typical brewing methods and incorrectly crediting those results to the tea itself.

While it’s difficult (and usually incorrect) to make broad factual statements about how much caffeine is in Green Tea vs. Black tea, the varieties used (Sinensis vs. Assamica), growing methods (shaded or high grown vs. low grown) and leaves selected (new vs. old growth) make the following teas stand out in their class:

Also, keep in mind that, because tea bags contain broken leaves of smaller size, they produce an infusion with more caffeine than loose tea does. This is also true of very fine loose tea. In comparison, the same volume of coffee yields at least double the amount of caffeine. In fact, most sodas have more caffeine as well.

There has been much concern in the United States recently about the possible dangers of caffeine. Caffeine tolerance varies greatly among individuals, with some being much more caffeine sensitive than others. A common misconception is that those who are caffeine intolerant should stock up on Decaf tea. Decaffeinated tea, in fact, is not caffeine free at all. It still contains about 5-10 mg per cup.

A common myth is that you can “make your own” decaf tea by briefly steeping the tea and throwing away resulting liquor. The theory is that most of the caffeine is washed away in this initial steeping. The truth, however, is something else entirely.

Caffeine is extracted over time, and so the first 30 seconds of a five minute steeping cycle may only extract 20 to 30% of the caffeine (the amount depends on the leaf and processing style). As importantly, the antioxidants and other health benefits of tea tend to be extracted more quickly than the caffeine. As a result, that first quick steeping or “washing” removes both the caffeine AND the healthy elements found in tea.

To eliminate caffeine intake completely, one must switch to herbal tea. All real tea comes from the same plant, Camellia sinensis, which contains caffeine. Herbal infusions, such as Chamomile, Rooibos and Peppermint, are made from botanicals not related to Camellia sinensis, and they are naturally caffeine free 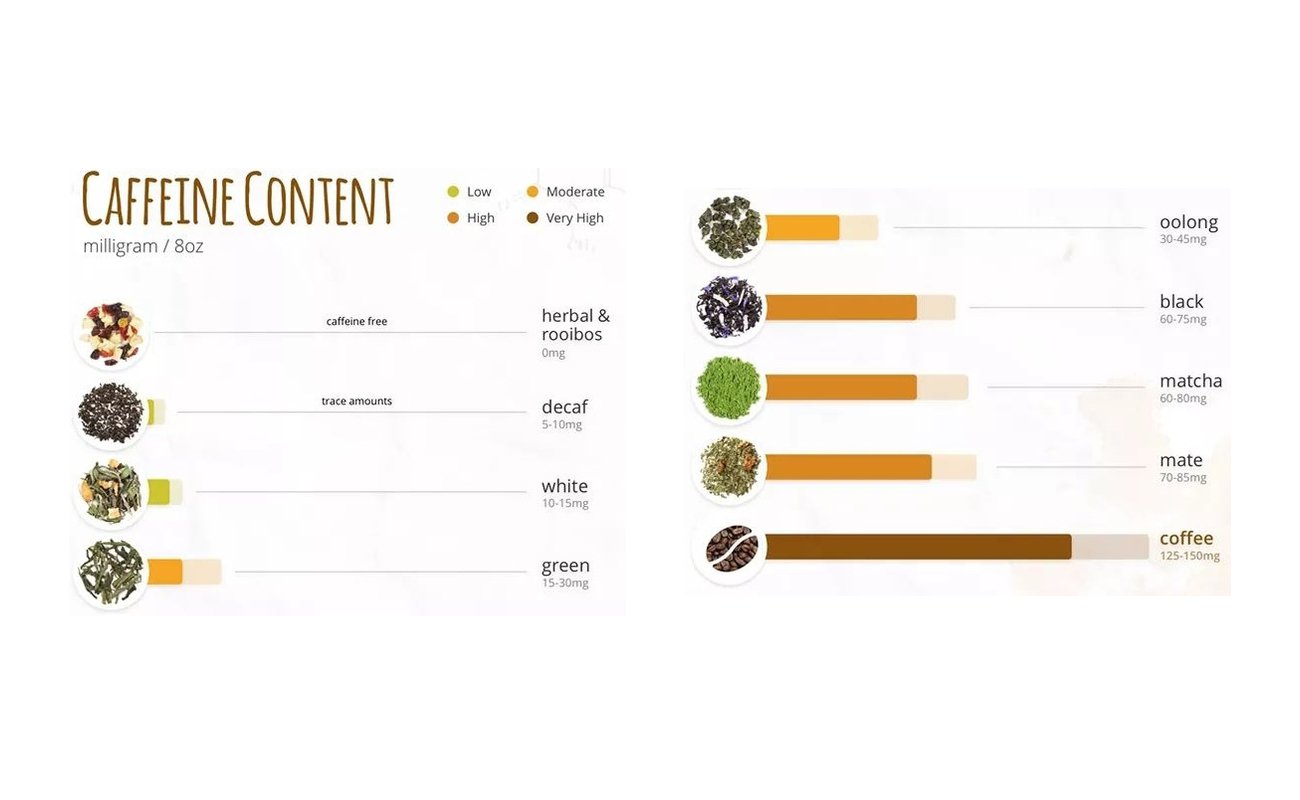